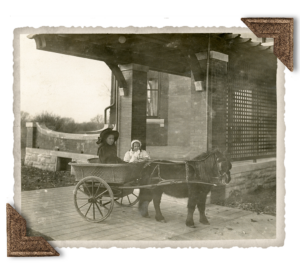 Brucemore was built before the arrival of cars. Horses provided the main form of transportation for Caroline Sinclair, who was chauffeured in a horse-drawn carriage.

By the time the Douglases added the Carriage House (now the Visitor Center) to the property in 1911, horses were used less as a form of transportation but still played a key role in the maintenance of the estate, pulling mowers across large sections of lawn.

These animals also provided Brucemore’s families with opportunities for outdoor recreation. In 1909, the Douglases purchased a Shetland pony, “Neddie,” as a birthday gift for their daughter Margaret, who would spend hours riding in a horse-pulled cart with her sisters and friends.

The Lions of Brucemore

One of Brucemore’s most celebrated and iconic residents was Leo the Lion—though there were three lions (all named Leo) in total who lived at the property between 1936 and 1951.

Listen to a soundclip of the Lion’s roar – Can you imagine hearing this on the grounds?

Leo I was brought to Brucemore as a cub by Howard Hall while he and Margaret were living in the Garden House (they later moved into the mansion after Margaret inherited the property from her mother, Irene Douglas).

There is little documentation about when the cub arrived or how it lived, though anecdotes from Margaret suggest he was kept (at least temporarily) in the basement. A colorful story she told in a documentary about her husband, “The Man Who Loved Lions,” recounts how Leo once scared an unsuspecting utility meter reader.

A letter from Howard to Margaret also suggests Leo was a direct descendant of Jackie the MGM lion, whom Howard met and posed with for a photo.  While there is no paper trail to prove this relation, we know Leo was purchased from Billy Richards of the World Jungle Compound, which billed itself as the “Home of Motion Picture Animal Actors,” adding credibility to Howard’s story.

Sadly, Leo I passed away before reaching adulthood, though the cause of death remains unknown.

Listen to a soundclip from Howard’s letter

“Had some pictures developed and then some good ones of the famous Lion “Jackie” one of him standing up and putting his paws on my shoulder — and one of my riding him — he is a beautiful animal. 10 years old — the one you saw recently in the “Look” magazine — and our last year’s Leo’s brother — is as big as a house now — and is a marvelous fellow with a good disposition he just seemed to know that I was his Uncle — it made me very sad that our Leo could not have developed in the same way.”

The only one of Hall’s lions to live to adulthood, Leo II was the most well-known and documented of the three. While we don’t know where he spent his winters,  he lived in the enclosure on the south side of the Carriage House when the weather allowed. To the best of our knowledge, none of the lions ran loose on the grounds without supervision.

Leo II was the only lion to be buried in the pet cemetery, which records that he lived between 1937 and 1950. 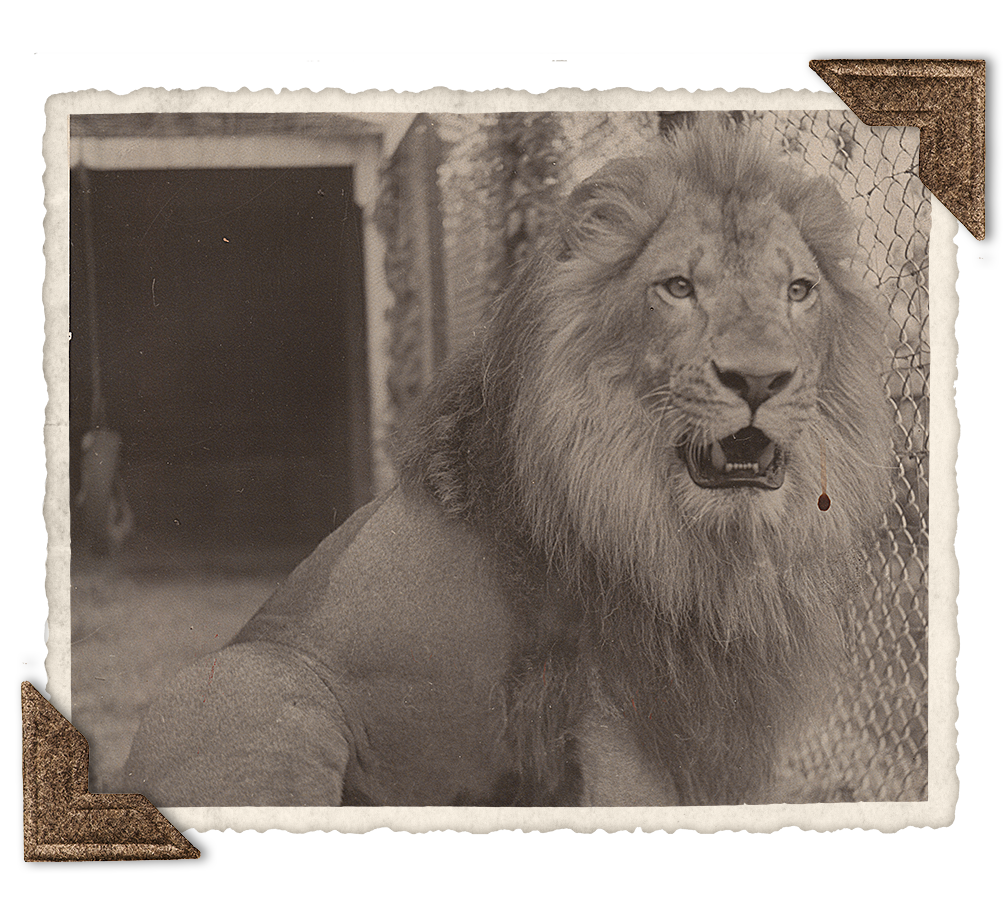 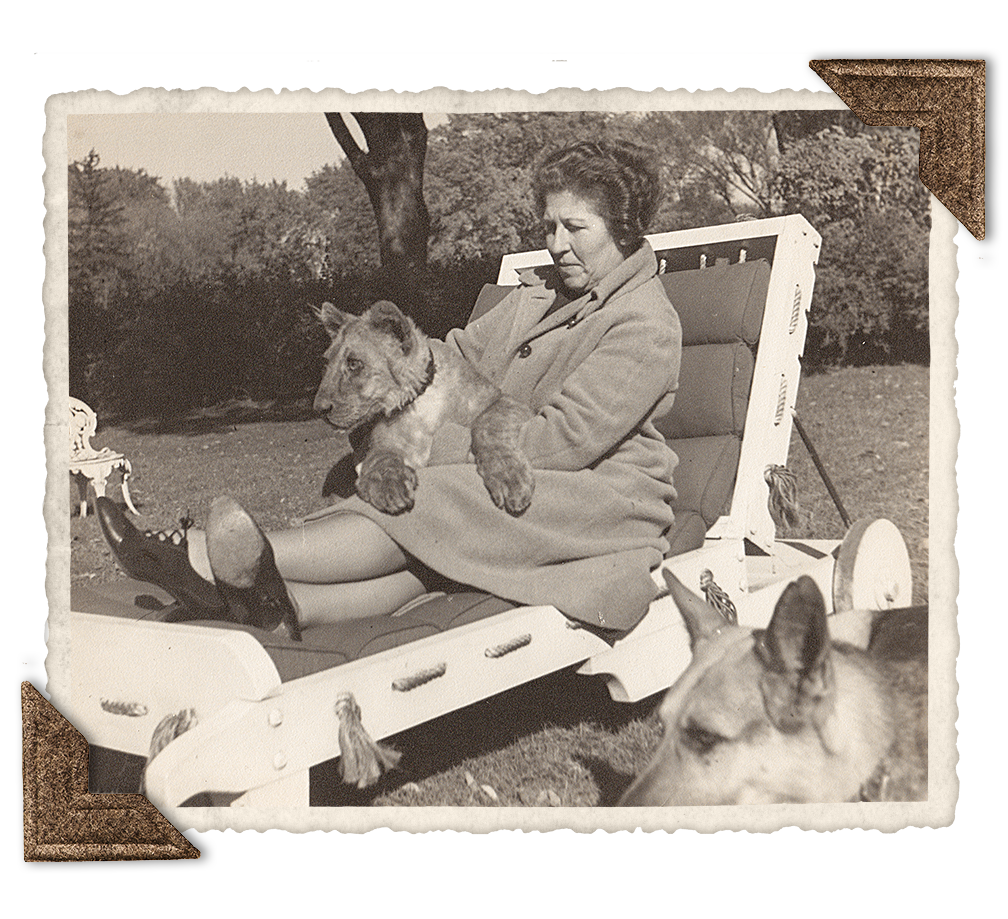 Leo III, the last lion to live at Brucemore, also died as a cub. Like the first Leo, this lion was purchased from the World Jungle Compound, and a letter to Howard from Billy Richards dated April 13, 1951, mentions arranging the shipment of a cub. An inscription from Margaret’s scrapbook about Leo III notes: “Born Easter 1951 arrived in C. R. by air May 9th. He was 7 weeks old.” 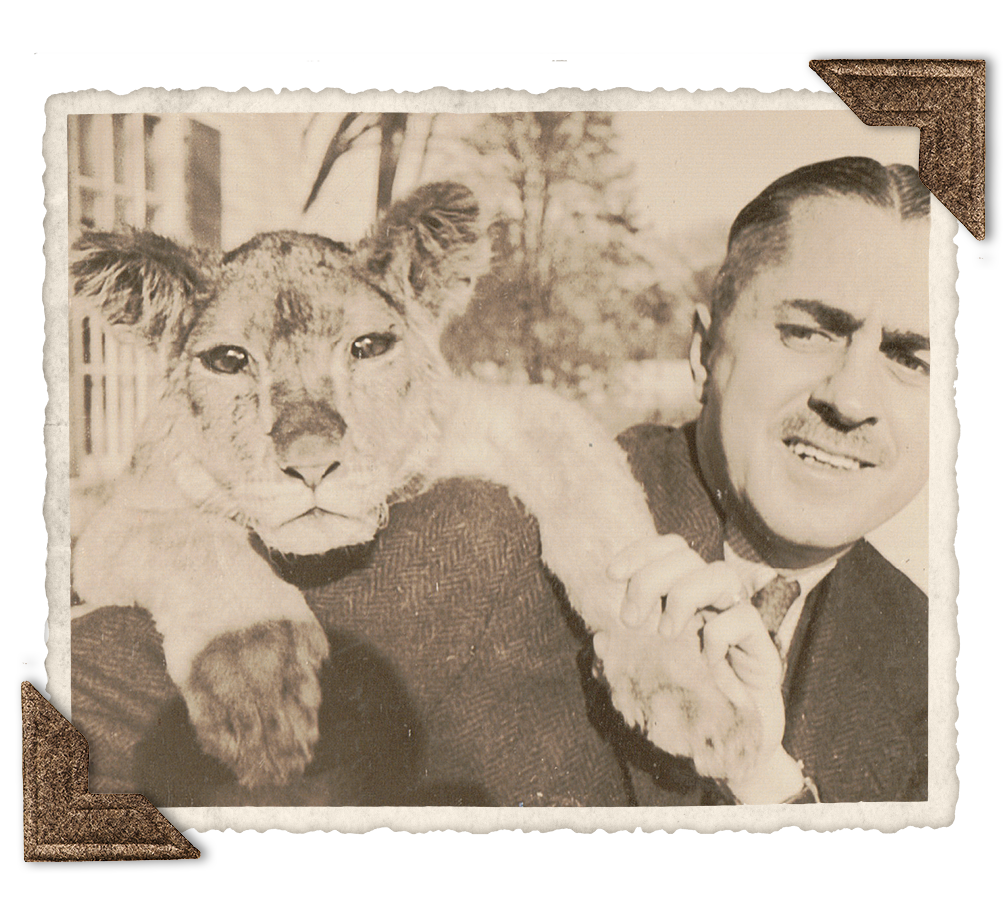 While many Cedar Rapids residents remember hearing the roar of a Lion at Brucemore after 1951, this was most likely a lion named “Lou,” who lived at Bever Park not far the estate—not Leo. Howard was said to have played a role in helping the park acquire this lion, and the Halls visited him several times over the years.

Howard Hall—who made frequent trips to Hollywood where he delighted in mingling with the celebrities of the day—was a natural showman who was fond of circus animals. In fact, Leo was not the only exotic pet at Brucemore. At one point, Howard and Margaret also owned a monkey named Pepper.

While we’re unsure what prompted him to keep lions, Howard’s personality, Hollywood connections, wealth, and access to space offer clues as to how he came to acquire such unusual pets.