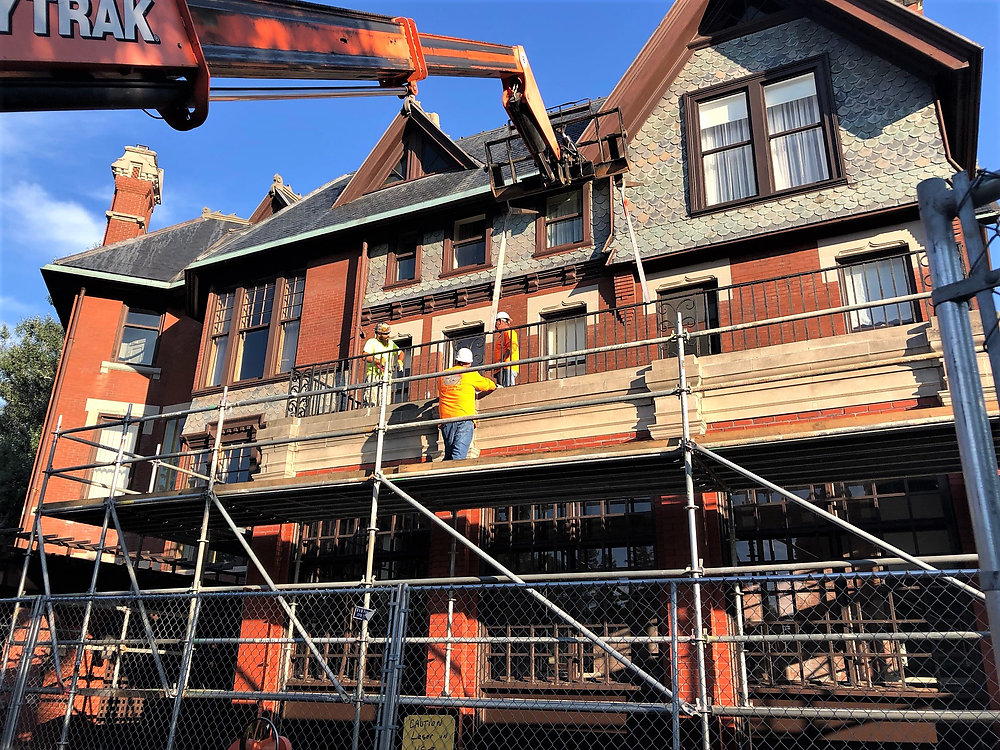 Brucemore kicked off a four-month preservation project on the service porch of the 1886 mansion in July. This project is a part of a larger effort to preserve the mansion envelope and accelerate preservation efforts across the site’s seven historic structures, 26-acre landscape, and infrastructure over the next five years.

“Two independent studies, and a series of initial projects, define a backlog of preservation work and capital improvements in excess of $7 million,” said Brucemore’s Executive Director, David Janssen. “The service porch is the first in a series of projects meant to address that need.”

The service porch was identified as the most critical component to complete first due to significant water infiltration and progressive loss of historic material. General contractor Rinderknecht Associates, Inc., and Architect, OPN Architects, will address these systemic issues by removing the existing roof and replacing it with roof pavers on a pedestal system. All preservation work completed at Brucemore, one of 26 National Trust Historic Sites in the country, is done in accordance with the U.S. Secretary of the Interior Standards. The service porch restoration project was funded through generous support of grants and donations from the Hall-Perrine Foundation, McIntyre Foundation, and Historic Sites Fund of the National Trust for Historic Preservation.

The preservation and operation of the site is administered by Brucemore, Inc., a private 501(c)3 non-profit governed by a local, 18-member Board of Trustees. Janssen said, “Brucemore has a history of entrepreneurial income sources and sound financial management, but the costs of preserving and maintaining the historic site are growing faster than available revenue streams.” Donations, grants, and annual membership gifts are fundamental to the ongoing preservation and programming of the site, representing both revenue and participation in the site’s mission.

Since the completion of the mansion’s construction in 1886, the mansion has had a service porch component. Initially, a wooden porch on the southern side provided access for servants and deliveries. When the second family to own Brucemore, George and Irene Douglas, oriented the primary entrance to the southern side in 1916, they also adjusted the service and delivery entrance away from where guests would arrive. By enclosing the Sinclair era wooden porch and erecting a brick wall to screen a courtyard, staff could work and run errands undetected by the family and guests. The courtyard wall was removed during the Hall era in the 1940s, but the porch remained. Today, the porch continues to be used in the same way as its intended purpose—to provide access for the behind-the-scenes work of staff, volunteers, and vendors.