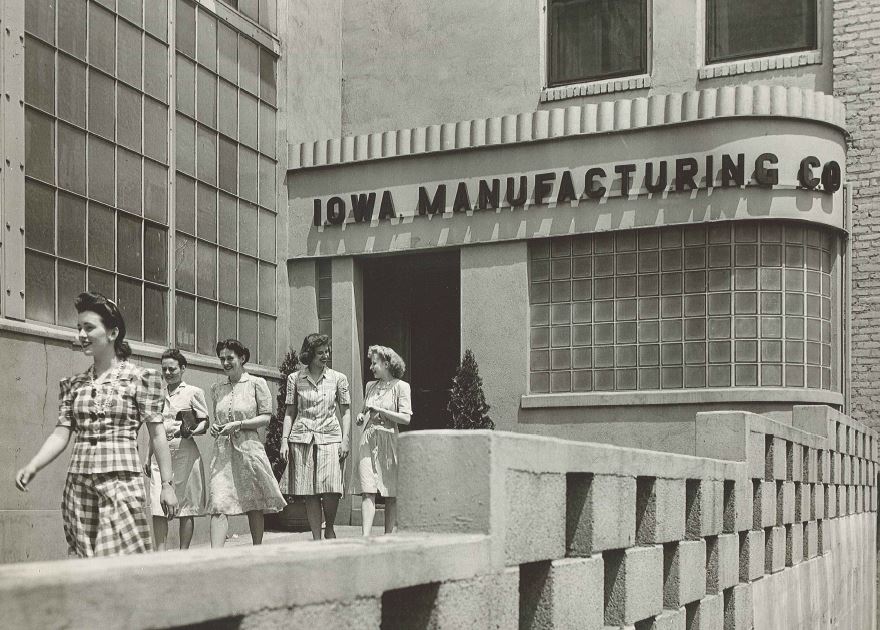 The History of the Iowa Manufacturing Company

In 1922, Iowa had only 334 miles of paved roads. Automobiles were becoming increasingly popular, but the lack of infrastructure across the country made transportation of both people and goods difficult. A nationwide campaign, The Good Roads Movement, called for the construction of paved roads. “Get Iowa out of the mud” was a slogan heard throughout the state and echoed across the country.

Early road construction equipment was clumsy, hard to transport, and costly.  Multiple machines ground aggregate, a basic road construction material consisting of crushed gravel, stone, and sand. Howard and John Jay hired Guy Frazee to invent the One Piece Outfit, which consolidated all stone processing into one machine making it more efficient and alleviating much of the work required to process aggregate at road construction sites. This signature piece of equipment streamlined road construction.

While innovation, durability, and quality spurred Iowa Manufacturing’s initial growth, the company’s commitment to customers distinguished it from competition. During the Great Depression, Iowa Manufacturing worked with customers to prevent repossession of equipment by extending loans and accepting debt-reduction payments as low as $50. The Works Progress Administration sustained the company by financing road building, a precursor for later infrastructure development.

Iowa Manufacturing Company’s success over the years was a result of employee commitment to the company and to one another. When the nation entered World War II, Iowa Manufacturing joined the war effort. After the first employee fell in combat, co-workers volunteered their day off and labor to construct the Spirit of Cedar Rapids, a crusher donated to the military in honor of their friend.

World War II provided an opportunity for Iowa Manufacturing to demonstrate the quality of its products.  Crushers and pavers produced in Cedar Rapids were sent around the world to build roads and landing strips for the military. After the war, many pieces of equipment remained abroad, which helped develop the company’s international reputation.

In recognition of the patriotism exhibited by Iowa Manufacturing and its employees, the War Department presented the company with the Army/Navy E (Excellence) Award in 1944. A ceremony was held where the company received a flag and each employee a lapel pin.

The war highlighted the importance of roads to the government. President Dwight D. Eisenhower signed the Federal-Aid Highway Act of 1956 and road building increased across the country. Iowa Manufacturing responded by developing a new line of asphalt pavers. For years, President Eisenhower’s picture hung in the mansion in recognition of Eisenhower’s impact on Cedar Rapids and the nation.

The company’s reputation for product excellence and employee commitment provided a strong foundation for its future. Howard’s relationship with Raytheon Company, a major industrial manufacturer, impacted the future of Iowa Manufacturing.

In 1965, Howard facilitated Raytheon’s acquisition of Amana, an appliance company that quickly became profitable after marketing the first countertop microwave. Admiration for Howard and a belief that any company connected to Howard was a strong investment led Raytheon to purchase Iowa Manufacturing in 1972, the year following Howard’s death. The company name was changed to Cedarapids, Inc., but the commitment to its employees was maintained.

In 1999, Raytheon sold Cedarapids, Inc. to Terex Corporation, a nationwide manufacturer of heavy equipment. Terex felt that continuing its Cedar Rapids operation was not strategic; and in 2009, Terex announced it would close the Cedar Rapids branch by March 2011. While the plant’s doors may have closed, the story of a greatly influential Cedar Rapids company continues.