From the Tahitian Room to Your Couch

Brucemore is home to thousands of artifacts that reflect more than 130 years of history. Nestled in the basement is an original 1940s man cave that has surprised guests since it originated. Take an up-close look at the objects that decorate the infamous Tahitian Room through an online exhibit. But first, grab a tiki cocktail or mocktail and bring a little bit of the Tahitian Room to your own home.

What’s the story behind the Tahitian Room and this collection?

In 1937 when Howard and Margaret Hall inherited Brucemore from Margaret’s mother, America was just beginning a half-century of fascination with South Pacific culture. America’s obsession with “tiki” culture began where many 20thcentury trends start – Hollywood. Tropic-themed rooms became synonymous with exotic luxury in the 1920s.

The Cocoanut Grove nightclub in Hollywood’s Ambassador Hotel was decorated with graceful faux-palm trees and walls painted with tropical scenes. The nightclub inspired countless similarly decorated clubs around the country. Hollywood films featuring South Pacific islands featured romance and adventure that increased the allure of the islands. But it was Ernest Gantt, who renamed himself Donn Beach and truly created the escapist tiki bar when he opened his bar “Don the Beachcomber” in Hollywood. The bar instantly became world famous for its eclectic Polynesian décor and for its newly invented tiki cocktails, like the Zombie. Donn the Beachcomber’s club featured another innovation – a tin ceiling with a sprinkler system above to create the sound of a tropical rainstorm for his guests.

Howard was no stranger to themed barrooms. He created his own speakeasy in the basement of the couple’s first home on the estate at Brucemore. Once they moved into the mansion, Howard started by creating a Western-saloon themed bar in the northwest corner of the basement. The room featured birch-bark lined walls, a player piano, and bar rescued from a closing local tavern. 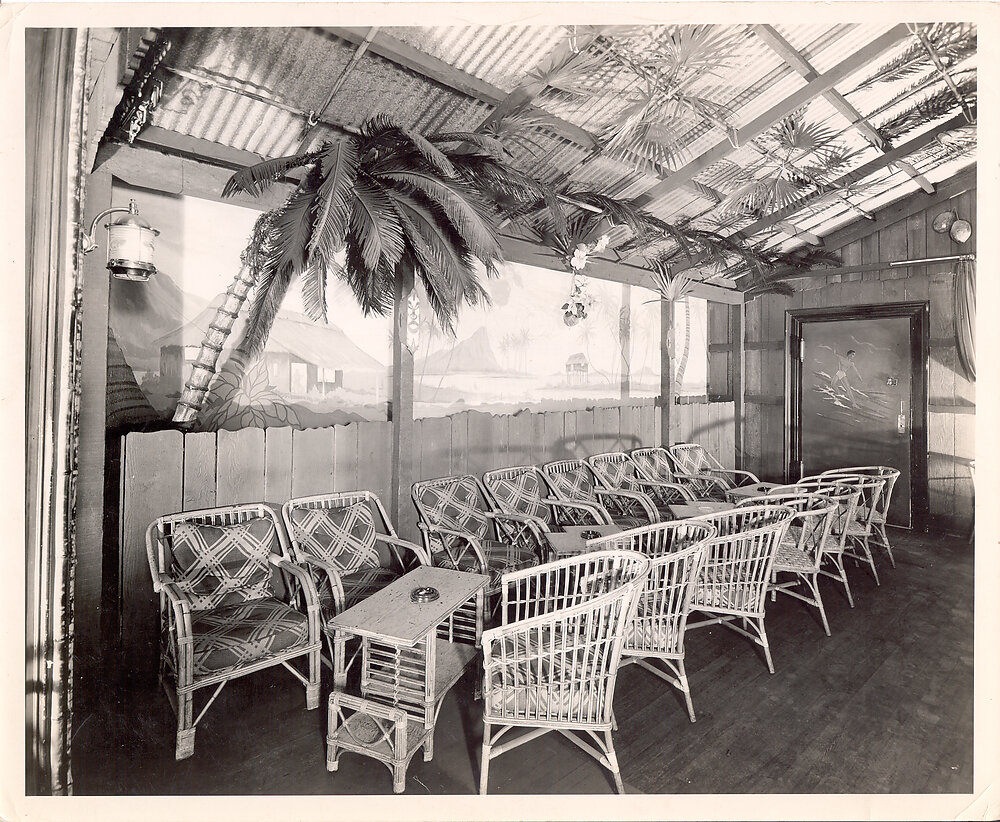 Ever the showman, Howard had grander plans for his basement oasis. Shortly after completing the Grizzly Bar, Howard hired local artisans to create the Tahitian Room, complete with many of the features he had encountered in his trips to Hollywood. The picture shown was likely the inspiration, as the wall in the photo is almost identical to the east wall of the Tahitian Room at Brucemore.

The floor in the Tahitian Room featured a hand-cut linoleum map of the South Pacific. The walls and ceilings were covered in thatch to match the interior of a Tahitian hut. Just like Donn the Beachcomber, Howard had a rain system installed on the east wall of the room to truly transport his guests to Tahiti, or maybe, just to Hollywood.

Howard’s fun-loving personality can be seen throughout the room, as can his business sense. The room was used not just to entertain, but to make a lasting impression on his business associates who came to visit his Cedar Rapids home. The Tahitian Room continues to make an impression on Brucemore visitors today.